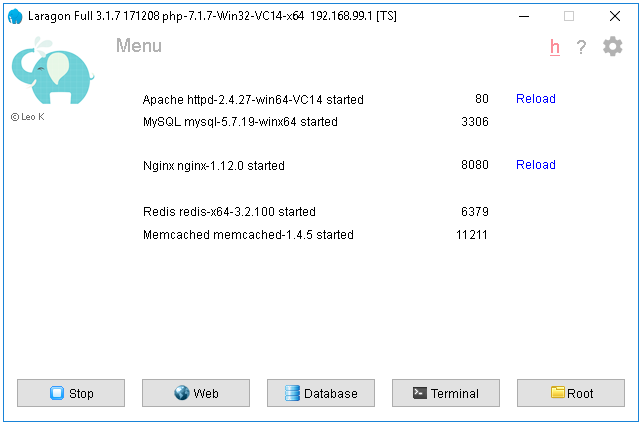 Laragon is a modern, fast and light local server.

It allows to create a powerful universal development environment, from the download page you can select various versions depending which programming language you would like to use: PHP, Ruby on Rails, Node.js/MEAN, Python Django/Flask, Java Spring/SpringBoot, Golang.

Laragon is a an opensource project hosted on GitHub, it has these features:

Pretty URLs: Use app.test instead of localhost/app.
Portable: You can move Laragon folder in another disk, computer… without any worries.
Isolated: Laragon has an isolated environment with your OS, it will keep your system clean.
Easy Operation: Laragon auto-configs allows no manual tweaks and setup. You can add another versions of PHP, Python, Ruby, Java, Go, Apache, Nginx, MySQL, PostgreSQL, MongoDB,… senza effortlessly.
Modern and Powerful: Laragon comes with modern architect which is suitable to build modern web apps. You can work with both Apache & Nginx as they are fully-managed.

Laragon is very lightweight, it uses less than 4MB RAM when running.
Laragon doesn’t use Windows services. It has its own service orchestration which manages services asynchronously and non-blocking so you’ll find things run fast and smoothly.

It is focused on performance, and designed for developers that want stability, simplicity and flexibility.

This site uses Akismet to reduce spam. Learn how your comment data is processed.

Windows software helps you convert all formats of videos easy and fast.

Instructions: register to the forum and introduce yourself in the “Presentazioni” section if you already didn’t (required), leave a “Thank” in the giveaway thread to show the giveway setup link.